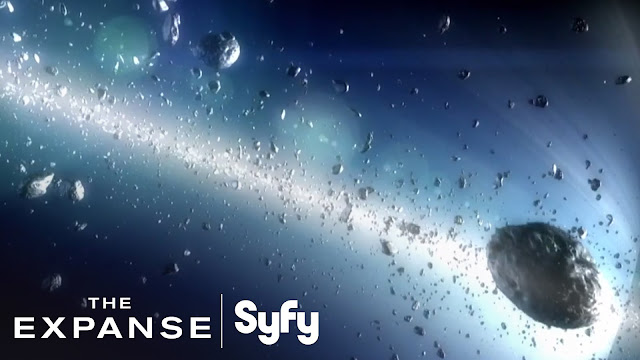 A Review by David Sooby

The Expanse is a new series on the Syfy Channel; Tuesday night at 9 PM (Central Time). Fortunately the channel is re-running the first two episodes frequently, almost daily, so you can easily catch up. Editor’s note: see recent episodes online at the official website’s “Episodes” page.


The Expanse is an adaptation of the popular hard-SF series by James S. A. Corey, the pen name of authors DanielAbraham and Ty Franck. The first novel, Leviathan Wakes, was a finalist for both the Hugo and the Locus awards for Best SF Novel.
One of my friends said the production is comparable to the reboot of Battlestar Galactica (BG), which in my opinion was the best-written SF ever made for television. I don't agree it's up to that level of quality, altho it is quite good and certainly a cut above most TV offerings.

The FX are high quality, perhaps comparable to BG or almost that good, but the actors look a lot more like the pretty, nondescript, competent but not exceptional actors which populate most series made for the Syfy channel.

One thing that stood out about BG was the exceptional level of quality of acting, from actors such as MaryMcDonnell and Edward James Olmos. You won't find anything comparable here, or at least I haven't seen anything outstanding in the first two episodes. In particular, the actor who plays Detective Miller seems too young and too handsome to be playing an experienced, world-weary character. The directing also seems to be merely competent, and not up to the high bar set by BG.

I have read the first two books in The Expanse series, and so far as I recall, they do seem to be sticking fairly close to the plot. That's good, because it's a great story. I hope they continue that, and don't deviate far from it... as, for example, GOT has done.

On the subject of real science vs. science-made-stupid: So far they seem to be doing pretty well, again by sticking close to the story as written in the book. This is a hard-SF series, a story where the writer pays close attention to scientific accuracy; it's not space opera like Star Trek. I did note in one FX scene they had a sizable, maybe 10-20 ton ice boulder moving in zero G to dock at a space station, and it was moving at something like 20-30 feet per second... perhaps 10 times as fast as would have been safe when approaching a structure where people live, even using heavy equipment to grab it as it came in. Moving that fast made for an exciting visual, but isn't at all realistic. However, that is only a single minor flaw in an otherwise excellent job of showing realistic-appearing scenes of space and spaceships. Not bad at all for two episodes!
Overall, based on watching the first two episodes, I'll give this a B+. It's very gratifying to once again see, on TV, a well-done SF series that is actually set in space! It's been awhile.

IMAGES: Many thanks to Wheedonopolis for the title image, and to Engadget for the James S. A. Corey cover montage. The three images of cast members in their roles are from the official Syfy Expansewebsite, and the ice-mining image is courtesy of the AlwaysSometimesVillains blog.


Posted by Jan Gephardt at 6:00 AM No comments: