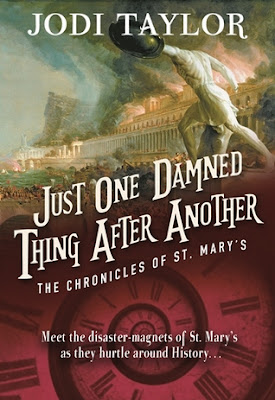 NOTE: All are welcome to the meeting, whether you’ve read the book or not. ADDED BONUS: This month's the meeting where the Fall/Winter book selections are chosen, so come prepared with a list!

This madcap British romp through history takes readers "From eleventh-century London to World War I, from the Cretaceous Period to the destruction of the Great Library at Alexandria," alongside the "disaster-magnets" of St. Mary's.

Even if you haven't read (or haven't finished) the book, the group would love to see you there, to discuss this beloved series-opener.
IMAGE: Many thanks to Goodreads for the cover image.
Posted by Jan Gephardt at 5:00 PM No comments:

Time is running out! You have TWO WEEKS!

Time may have more elastic properties for the historians of St. Mary’s Institute of Historical Research, but in our space/time continuum there are only about two weeks left before the August 28, 2017 meeting of the Kansas City SF&F Literati book club.

The Barnes & Noble overview offers us a glimpse of what's in store: "The first book in the USA Today bestselling British madcap time-travelling series, served with a dash of wit that seems to be everyone’s cup of tea.

“'History is just one damned thing after another.' —Arnold Toynbee

"Behind the seemingly innocuous facade of St. Mary’s Institute of Historical Research, a different kind of academic work is taking place. Just don’t call it 'time travel'—these historians 'investigate major historical events in contemporary time.' And they aren’t your harmless eccentrics either; a more accurate description, as they ricochet around history, might be unintentional disaster-magnets.

"The first thing you learn on the job at St. Mary’s is that one wrong move and history will fight back—sometimes in particularly nasty ways. But, as new recruit Madeleine Maxwell soon discovers, it’s not only history they’re often fighting.

"The Chronicles of St. Mary’s tell the chaotic adventures of Max and her compatriots—Director Bairstow, Chief Leon Farrell, Mr. Markham, and many more—as they travel through time, saving St. Mary’s (too often by the very seat of their pants) and thwarting time-travelling terrorists, all the while leaving plenty of time for tea.

"From eleventh-century London to World War I, from the Cretaceous Period to the destruction of the Great Library at Alexandria, one thing is for sure: wherever the historians at St. Mary’s go, chaos is sure to follow in their wake."

The meeting will be held on the second floor of the Oak Park Barnes & Noble Booksellers in Overland Park, KS, at 7:00 p.m. the evening of Monday, August 28, 2017. Everyone is welcome to come, even if they haven't read the book.
IMAGE: Many thanks to Goodreads for the cover image.

Posted by Jan Gephardt at 9:26 AM No comments: 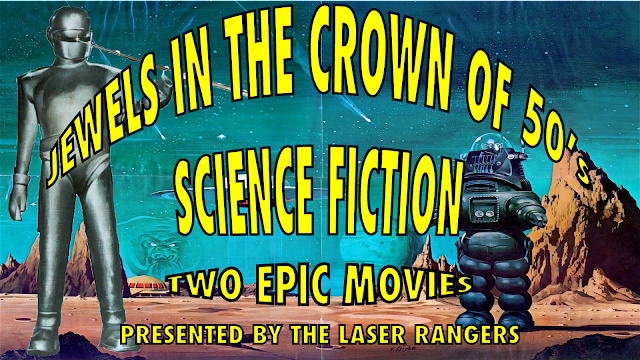 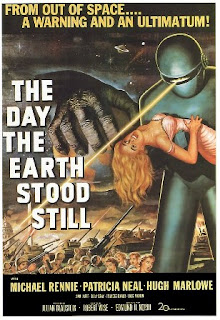 An alien lands and tells the people of Earth that they must live peacefully or be destroyed as a danger to other planets.

Check out the original trailer. 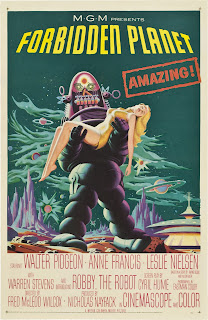 A starship crew goes to investigate the silence of a planet's colony only to find two survivors and a deadly secret one of them has.

IMAGE CREDITS: The information for all of these shows come from the invaluable IMDB. The movie posters come from Wikipedia or the movie's  respected distributors.

Thanks to Ken Keller for finding our movie trailers. 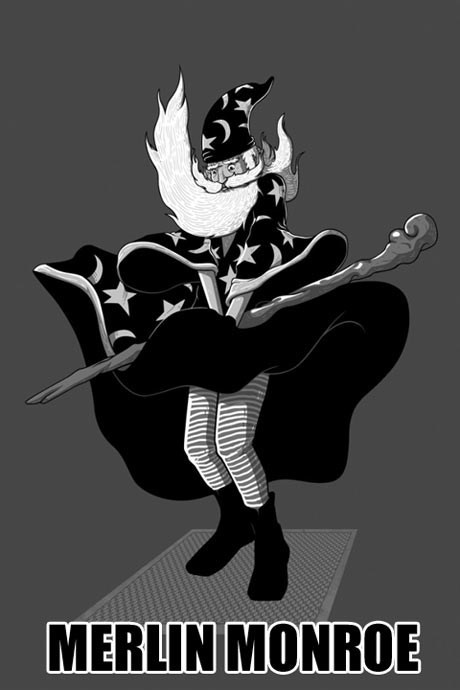 IMAGE: Many thanks to Fischkopfsuppe’sSoup Stream, for this image.