According to the new 2018 Bylaws, voted in by a quorum of dues-paid members at the December, 2017 meeting, there are two new officer jobs to fill on the KaCSFFS Executive Board.

We'll still have a Director, Treasurer, Secretary, and Communications Officer, whose job descriptions have not changed in several years. However, the new Bylaws state that the ConQuesT Chair will no longer have a voting position on the Board.

Instead, the new voting positions to fill will be Quartermaster (in charge of managing and storing KaCSFFS property, as well as transporting it to and from meetings as needed) and Program Director (in charge of developing program content for monthly meetings, communicating with speakers or presenters, coordinating with party-planners, and keeping the Communications Officer abreast of developments).

If you think you have the right stuff to fill one of these positions, please come to the April meeting! Nominate yourself! If two or more persons self-nominate for the same office, a quorum of the dues-paid members in attendance will vote to choose between them.

Local writers take the spotlight
Kansas City has a long, rich tradition of being the home of science fiction and fantasy writers. This continues today: many writers live and work in the Kansas City metro or nearby parts of the region; many of them, in turn, are members of writers' groups.

The Program portion of our meeting, to take place directly after the short business meeting, will consist of a panel discussion about writers' groups, and three readings by local authors.

We heard readings by a couple of Noble Fusion writers last October; in April the guest writers are members of the Writers-in-Rob's-Living-Room group, hosted monthly by Robert Chilson, a longtime author of science fiction, fantasy, and horror novels and short stories.

For the panel discussion and readings, we'll move to the Library upstairs. Rob himself and science fiction author Dora Furlong will join our three guest readers, Holly Messinger, Lynette M. Burrows, and Jan S. Gephardt to talk about writers' groups and how they function (or malfunction, sometimes).

Readings by Messinger, Burrows, and Gephardt:
After the panel discussion, three of the panelists with new projects on the horizon will read short selections from them.

Holly Messinger
Holly Messinger, author of gothic horror novel set in the old west  The Curse of Jacob Tracy (2015 from Thomas Dunne Books), will read from the upcoming sequel, Curious Weather (due in 2019 from St. Martin's Press). 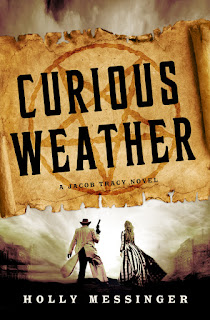 Here's a brief description of the book:
"When Jacob Tracy—Civil War veteran, ex-seminarian, and reluctant psychic—agrees to move into Miss Fairweather’s St. Louis mansion and study magic with her, he has one purpose in mind: to hunt down and destroy the necromancer Mereck, a predatory madman who has twice tried to make a meal of Trace and trapped Trace’s partner Boz in a monstrous half-life.

"Sabine Fairweather has her own grievance with Mereck, though Trace doesn’t know the details and doesn’t particularly want to. The woman may be a brilliant scientist and a powerful witch in her own right, but there is darkness in her and bitter secrets that threaten the tenuous faith Trace has in her.

"With Mereck’s minions circling ever closer, and old allies posing unexpected threats, Trace knows he and Sabine have no choice but to trust each other. But for that to happen, he will have to lay bare all the deepest secrets of her soul…and quite possibly her heart."

Lynette M. Burrows
Lynette M. Burrows  is the author of My Soul to Keep, an alternate-history thriller set for release from Rocket Dog Publishing this summer (stay tuned to her website for details).

Here's a brief description of the book:
"Miranda Clarke lives a charmed life . . . until she breaks the rules.

"It is 1961 but the world isn’t the one you know. The Prophet Josiah Shepherd, backed by billionaire J. D. Wagner and the Isolationist movement, kept the United States of America from entering World War II. The Nazis control Great Britain, Europe, and Northern Africa. Unopposed, Japan rules the east. America is a theocracy, a land of righteous repression led by the Fellowship and its council of greedy white men.

"Miranda’s parents are part of the Fellowship's elite, the inner circle. Her father, the nation’s premier preacher-politician, is on his way to the presidency. And Miranda's hope of living a quiet, private life vanishes. But when Miranda makes a break for freedom, she learns everything she thought she knew is a lie:

"Her parents and the supposedly benevolent Fellowship Council aren’t benevolent.

"And the terrifying tales of the angel-assassins called Azrael aren’t just stories.

"Miranda must escape a religious re-education prison, discover the truth behind her horrifying nightmares, outwit her mother’s deadly ambitions, and destroy the ruthless, cloned angel-assassins who pursue her—or die."

Jan S. Gephardt
Jan S. Gephardt is the author of What's Bred in the Bone, a space opera/mystery set in a future when Humans have found or created other habitats in the reaches of space. If all goes well, it'll be available in summer or early fall 2018:

Here's a brief description of the book:
"XK9 Rex is a dog who thinks too much.

"When a spaceship blows up among the docks at the Hub of Rana Habitat Space Station, the implications reach to the highest levels of the tiny sovereignty. But Rex is sidelined by a rookie mistake that has put his Human partner Charlie in the ICU.

"Now he’s on the outside looking in: worried, lonely, desperate to get back to his Pack and his life’s-work. He and his Packmates have been engineered and cyber-enhanced to be the most advanced forensic tools available to law enforcement, by a famous genetics lab—underwritten by the military intelligence of Transmondia, the Chayko System’s dominant power.

"But the XK9s are more than forensic tools, and more than their owners, the Ranan Orangeboro Police Department, ever bargained for. When Rex strives to prove just how capable he and his Packmates truly are, he unmasks a secret that could destabilize the entire System—and places all XK9s everywhere in mortal peril."

IMAGES: Many thanks to the Monterrey Peninsula Water Management District, for the "Elections" logo; Robert Chilson and Dora Furlong, for their photos; to Holly Messinger for the photo of her; to Macmillans for the Curious Weather cover image; to Lynette M. Burrows for the photo of her, as well as the photo of the Azrael by her artist husband Robert Burrows; to Colette Waters Photography for my head shot; and to Lucy A. Synk for the whimsical vision of XK9 doggie-back riding.
Posted by Jan Gephardt at 5:00 PM No comments:

A troubled boy dives into a wondrous fantasy world through the pages of a mysterious book. -IMDB

In a countryside town bordering on a magical land, a young man makes a promise to his beloved that he'll retrieve a fallen star by venturing into the magical realm. -IMDB

Posted by Tygepc at 4:30 PM No comments: