Last hurrah at the Writers Place 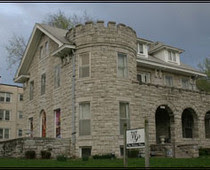 End of an era
The owners have spoken. The Writers Place organization is moving, and the "stone castle" on Pennsylvania Avenue will be closed.

The KaCSFFS Holiday Party of Saturday, December 15, 2018 is the final scheduled event for the venue that's been our home since 2001.

The KaCSFFS Board is still looking for a new home for us, starting with the January 19, 2019 meeting. Stay tuned. But meanwhile, let's say goodbye to our longtime home with a great party!

The Readings
Our guest readers all are local writers, who've graciously agreed to share "something seasonally appropriate" with us. Please help us welcome Rob Howell, Karin Rita Gastreich, and Sean Demory.

Rob Howell
Rob is a reformed medieval academic who draws upon those skills and resources for his stories and settings. He has also been an IT professional, a cook, and a soda jerk. As a child, his parents discovered about the only way to keep him quiet was to give him a book. Without books, either he or his parents probably would not have survived. Possibly both.

He decided to write professionally when he discovered he was too educated for most jobs, and not quite educated enough for a few. Fortunately, he had always written and this was his chance to follow in the footsteps of Forester, Tolkien, Weber, Drake, Parker, Chandler, and Francis. Rob is the author of the Shijuren series and other stories.


Karin Rita Gastreich
In her website bio, Karin writes of herself: "In November of 2007, a curious dream sparked the opening lines of what would become my first full-length fantasy novel, Eolyn. I didn’t realize it at the time, but I had opened the door to yet another exciting world: the world of publishing.

"I balance my life as an ecologist and writer. I treasure all living things and weave many fantastic creatures into my stories. The worlds I create are a strange amalgamation of medieval Europe and colonial America, with misty forests, vast savannas, and steamy jungles. They are populated by brave heroines, noble heroes, and twisted villains.  They reflect the magic I’ve known all my life, of dance and music and play, as well as the hardship that I and many of the people I care for have encountered along the way.

"These stories come from the heart. I give them to you in hopes that you will make them your own."Eolyn is the first book in the Silver Web Trilogy. Find Karin's writing on Amazon and elsewhere. 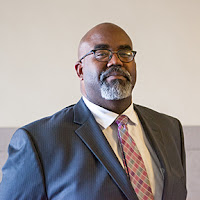 Sean Demory
Sean is a frequent reader at KaCSFFS meetings, as well as repeat appearances at ConQuesT. His last appearance at a KaCSFFS meeting was in October, when he shared a supernatural tale inspired in part by his own childhood experiences.

He also is the power behind Pine Float Press, which has published a variety of books (including the anthology Palookaville, which held a release event last year at a KaCSFFS meeting).

IMAGES: Many thanks to The Writers Place for the photo of our longtime venue; we'll hate to lose you! The authors' photos for Rob Howell and Karin Rita Gastreich are courtesy of those authors, and used with their permission. The photo of Sean Demory is from the Johnson County Library website, though the original source-page has since been removed).
Posted by Jan Gephardt at 6:20 PM No comments: