Short features will be shown before the main feature. Don't miss them!

An astronaut becomes stranded on Mars after his team assume him dead, and must rely on his ingenuity to find a way to signal to Earth that he is alive. -IMDB


~~~~~
Please join us for a potluck dinner after the feature. Bring something to share. It can follow the theme, or be something you prefer. Afterwards we'll discuss and choose movies for the upcoming year.
~~~~~ 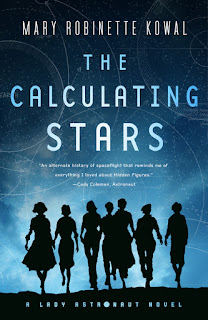 The Story:
On a cold spring night in 1952, a huge meteorite fell to earth and obliterated much of the east coast of the United States, including Washington D.C. The ensuing climate cataclysm will soon render the earth inhospitable for humanity, as the last such meteorite did for the dinosaurs. This looming threat calls for a radically accelerated effort to colonize space, and requires a much larger share of humanity to take part in the process.

Elma York’s experience as a WASP pilot and mathematician earns her a place in the International Aerospace Coalition’s attempts to put man on the moon, as a calculator. But with so many skilled and experienced women pilots and scientists involved with the program, it doesn’t take long before Elma begins to wonder why they can’t go into space, too.

Elma’s drive to become the first Lady Astronaut is so strong that even the most dearly held conventions of society may not stand a chance against her.

Available from booksellers everywhere, including host location Barnes & Noble Booksellers. And don't forget to check for it at your local library!

IMAGE: Many thanks to Macmillan Publishers for the cover photo. Thanks also are due to Amazon, for the list of recognitions and the book description, and to Barnes & Noble for saving me the trouble of looking up a source for "Lady Astronaut of Mars."

In case you missed it:
(because Jan missed the chance to promote it--sorry)
The October 2018 Selection was

Flex ('Mancer Book One)
by Ferrett Steinmetz
See what the SF&F Literati thought of this book!

The Story:
FLEX: Distilled magic in crystal form. The most dangerous drug in the world. Snort it, and you can create incredible coincidences to live the life of your dreams.

FLUX: The backlash from snorting Flex. The universe hates magic and tries to rebalance the odds; maybe you survive the horrendous accidents the Flex inflicts, maybe you don’t.

PAUL TSABO: The obsessed bureaucromancer who’s turned paperwork into a magical Beast that can rewrite rental agreements, conjure rented cars from nowhere, and track down anyone who’s ever filled out a form.


But when all of his formulaic magic can’t save his burned daughter, Paul must enter the dangerous world of Flex dealers to heal her. Except he’s never done this before – and the punishment for brewing Flex is army conscription and a total brain-wipe.

IMAGE: Many thanks to Amazon, for both the cover image and the book description.
Posted by Jan Gephardt at 3:18 PM No comments:

Neil Gaiman?!? Where? When?
This is a rare opportunity, and we're certain these tickets will go fast. Plan accordingly!

About GETTING tickets:
Available starting 11:00 a.m. TOMORROW, Monday October 22, 2018.
FREE for the asking.
Limit TWO.
IN-PERSON requests only.
Only at the Lied Center Box Office in Lawrence, KS

Gaiman's Appearance, NOV 19, 2018:
"An Evening with Neil Gaiman" is set for November 19 at 7:30 p.m. at Lied Center in Lawrence, KS, a program hosted by the Hall Center for the Humanities at KU in Lawrence. Gaiman's appearance is supported by the Hall Family Foundation.

In case you need a refresher about Gaiman, he is a bestselling author "listed in the Dictionary of Literary Biography as one of the top ten living post-modern writers. He is the author of American Gods, The Graveyard Book, Coraline, The Sandman series, and countless other works of prose, poetry, film, journalism, comics, song lyrics, and drama," as the Hall Center announcement notes.

IMAGE: Many thanks to Kyle Cassidy and Wikipedia for the photo of Neil Gaiman, and to the Hall Center and the Hall Family Foundation for sponsoring his appearance in our area.
Posted by Jan Gephardt at 5:00 AM No comments:

Haunting the Writers Place on Saturday!

Come for the Readings . . .
Two distinguished local authors will bring some of their spookier works of short fiction to share with us.

KaXFEN may remember being riveted by the marvelous reading voice and fascinating fiction of Sean Demory, from last year. What's the plan for this year? "I'll potentially be reading something old, something new and something very new depending on time," he said.

Aaron Hollingsworth has been a KaXFAN, but this'll be his first time reading for a KaCSFFS meeting. He's chosen selections from The Apothecary of Mantua: A Supernatural Sequel to Romeo & Juliet.

Stay for the Party . . .
KaCSFFS Halloween Parties are a tradition for the October meeting. Many of us love to wear costumes (what better opportunity, right?), but don't feel you must. If you'd rather come and enjoy the results of others' labors, there probably will be plenty of fun costumes to admire (admirers are always welcome!)


PHOTOS: The photos of Sean Demory at last year's Halloween meeting, those in the Haloween Costume montage, and the photo of the food table all were taken by Jan S. Gephardt, for the purpose of KaCSFFS publicity. If you'd like to use it, please attribute Jan, and provide a link back to this blog post. The photo of Aaron Hollingsworth is courtesy of Aaron's Facebook Author Page.

Posted by Jan Gephardt at 7:00 PM No comments: