The program: WINTER in SF-F and Horror
From the motto "Winter is coming" (Game of Thrones) to Planet Hoth to The Shining, the season of winter and wintry-type places form a thread woven through many tales in our favorite speculative genres.


We're still working to put together a panel of writers and/or readers who can guide our exploration of how the big freeze has left its icy mark in some of our best-loved fiction. Check back later at The KaCSFFS Blog for updates and more details.


The CHOCOLATE
If you're allergic or not a chocoholic, we apologize.

But for much of fandom, chocolate is a favorite passion, which we share with favorite characters such as Counselor Deanna Troi of Star Trek: The Next Generation, for whom Chocolate is a serious thing, and Honor Harrington, focal character for the sf novel series by David Weber, who prefers a cup of hot cocoa to coffee.


It can even be a palliative remedy (it is the best-ever cure for a close-call with Dementors), of just the sort the folks at Hogwarts use to ease their fears and pains. Chocolate Frogs, anyone?


If you'd like to help us celebrate our food theme, please plan to bring a favorite share-able concoction made from chocolate, or keep it simple with a package of your favorite wrapped chocolates, to share with your fannish friends!

IMAGES: Many thanks to the following, for these wintry images: to Wallpaper Cave, for the "Winter is coming" image; to the official Star Wars website, for the chilly Tauntaun and rider on the snowbanks of Hoth; and to IMDB for the still from the 1980 movie The Shining.
We also deeply appreciate the chocolate-themed images, as follows: to the Deanna Troi Day Twitter page, for the Troi/Chocolate meme image; to Super Hero Hype for the detail from the David Mattingly cover for the Honor Harrington book The Short Victorious War; and to Smosh, for the movie still of Harry Potter with his first chocolate frog.

Posted by Jan Gephardt at 5:00 AM No comments:

Our panel and audience have spoken!
At the January 20, 2018 KaCSFFS meeting we once again invited Carol Doms and Ken Keller to present a panel discussion about the best new shows (2017 debuts) in the science fiction, fantasy, and related speculative genres.

The discussion included shows one can see on TV, stream, or download. Their spreadsheet (probably incomplete) listed 50; audience members added another.

Between our panelists and the audience, ten recommended shows emerged. However--as they pointed out--it's impossible for anyone to follow all the shows and still have a life. They may have missed some good ones. If you think a good one was overlooked, please tell us in the Comments section!

Fiction Series
These are listed in alphabetical order, not order of preference. Click on the links in the captions for more information, trailers, and other goodies.

A Series of Unfortunate Events

Documentaries
This year we also heard about two fascinating non-fiction documentaries about SF or things that relate to SF.

Leah Remini: Scientology and the Aftermath

We weren't very far into 2018 at the time of this January 20 meeting, but the panel already was excited about the pilot for one show:

PLUS! great Chili!
Let it not be forgotten that the Annual KaCSFFS Chili Cook-off drew a large number (for us) of contender-chili recipes, from relatively mild to extremely spicy. Members enjoyed the samples, and when the votes were counted, the winners were:


IMAGES: The photo of our panelists was taken with their permission by Jan S. Gephardt, for this post and other KaCSFFS publicity.
We extend many thanks to Slashfilm via The Gryphon (includes a review), for the American Gods image; to GameRant for the Castlevania image; to Flixable for the Dark image; to Honk if You Love Justice's review of the series for the Defenders image; to Wikipedia for the title card image for The Gifted; to Script (with a post about the craft of scriptwriting), for the image from The Handmaid's Tale; to Next Episode for the Happy! image; to Live 105 for the Punisher logo; to YouTube for the image for A Series of Unfortunate Events (nice trailer here); and to Wallhaven for the Star Trek: Discovery title image.
Our deepest thanks also go to The Emmys for the title image of Leah Remini: Scientology and the Aftermath; to SkyBound for the title image for Robert Kirkman's Secret History of Comics, and the link to the YouTube trailer; and to IGN via YouTube for the Black Lightning image (and official trailer). We appreciate you all!
Posted by Jan Gephardt at 5:00 AM 1 comment:

Cultivate the seeds of discussion with the SF&F Literati THIS MONDAY! 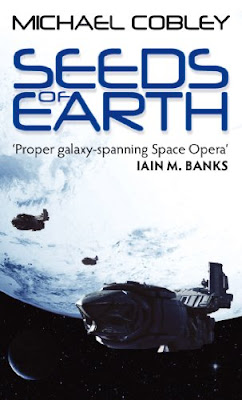 Join the Kansas City SF&F Literati on the second floor by the windows, to discuss the first selection of 2018--then help pick the next four selections the group will read. All are welcome (including first-timers) to come to meetings--even if you haven't finished it. Come join the discussion!

Seeds of Earth
The first intelligent species to encounter mankind attacked without warning. Merciless. Relentless. Unstoppable. With little hope of halting the invasion, Earth's last roll of the dice was to dispatch three colony ships, seeds of Earth, to different parts of the galaxy. The human race would live on ... somewhere.

150 years later, the planet Darien hosts a thriving human settlement, which enjoys a peaceful relationship with an indigenous race, the scholarly Uvovo. But there are secrets buried on Darien's forest moon. Secrets that go back to an apocalyptic battle fought between ancient races at the dawn of galactic civilization. Unknown to its colonists, Darien is about to become the focus of an intergalactic power struggle where the true stakes are beyond their comprehension. And what choices will the Uvovo make when their true nature is revealed and the skies grow dark with the enemy?
--Overview provided by the publisher

"After a devastating and unanticipated alien war, Earth sent out colony ships to preserve humanity. The human colony on Darien has coexisted peacefully with the indigenous Uvovo for the past 150 years, but now a power struggle for control of the galaxy threatens the amity. A space opera series opener by the author of the Shadowkings trilogy."
--Library Journal

"Seeds of Earth has everything: well-realised extraterrestrials, scheming artificial intelligences, set-piece space battles and bizarre technology from the dawn of the galaxy. The first book of the trilogy is also a convincing portrayal of political machinations and the plight of individuals caught up in events beyond their comprehension."
--Eric Brown, The Guardian online

"Seeds of Earth is as powerful as Smoke on the Water, as twisted as Paranoid and as epic as Stairway to Heaven. As a lover of epic fantasy I tell you that is the kind of space opera I want to read. For me it is epic fantasy in future. I recommend it! Give it a go...."
--"Edifanob," on Only The Best Science Fiction & Fantasy

IMAGE: Many thanks to Amazon for the cover art.
Posted by Jan Gephardt at 8:30 PM No comments:

TV and a bowl of chili! What better, on a winter night?

The Annual KaCSFFS Chili Cook-off is an ever-popular winter meeting event. We're following tradition and holding it in January this year. Please prepare and bring your favorite chili recipe, to share and vie for recognition!

We will have separate categories for SPICY and MILD, so the unwary won't be disappointed. Please prepare a small sign that:


We'll vote using the chili titles to identify favorites in each category!

Don't want to bring chili? Then bring your favorite side dishes or garnishes: cornbread, shredded cheese, corn chips, sour cream--whatever you like best with your chili! And as ever, bring your own drinkables, too. KaCSFFS provides cups, bowls, and tableware.

A review of SF, Fantasy and Horror TV in 2017
Another KaCSFFS January favorite also returns: our panel discussion of the best and worst science fiction, fantasy, and horror genre television shows in the year just ended. Recently, we've had a lot of them to discuss!

Weather permitting, we'll hear once again again from our panelists Carol Doms, Ken Keller, and Earline "Cricket" Beebe. Have your own strong opinions? Bring them: (civil and reasonable) audience participation is encouraged! Help us make sense of 2017's television offerings.

IMAGES: The photo of the KaCSFFS Chili cook-off lineup from 2015 was taken by Jan S. Gephardt for KaCSFFS promotional use. In the montage, the Lucifer image is from the Lucifer Wiki; the one for The Expanse is from YouTube; the Stranger Things image is from TV Series Online; and that for Outcast is from a website that's no longer there. Many thanks to all!
Posted by Jan Gephardt at 4:56 PM No comments:

Have you finished it yet?
Michael Cobley's "Humanity's Fire" series-opener Seeds of Earth is the selection up for discussion at the Kansas City SF&F Literati meeting, set for January 22, 2018.

"Seeds of Earth has everything: well-realised extraterrestrials, scheming artificial intelligences, set-piece space battles and bizarre technology from the dawn of the galaxy. The first book of the trilogy is also a convincing portrayal of political machinations and the plight of individuals caught up in events beyond their comprehension."
--Eric Brown, The Guardian online

The discussion's in just two weeks!
But there's still time to read it!
Mark your calendar for January 22, 2018 at the Oak Park Mall Barnes & Noble, second floor, 7:00 p.m. Everyone's welcome--even if they haven't finished the book. First-timers are welcome!

Note that the January meeting offers a special opportunity: that's the night they'll choose the Spring selections! Don't miss it!

IMAGE: Many thanks to Amazon for the Seeds of Earth cover image.
Posted by Jan Gephardt at 5:00 AM No comments: 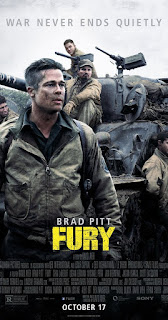 A grizzled tank commander makes tough decisions as he and his crew fight their way across Germany in April, 1945. -IMDB

Feature Presentation!
What Did You Do in the War. Daddy? 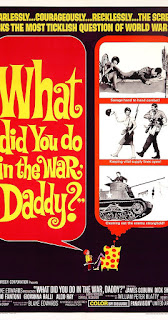 In World War II, a strategic Italian village agrees to surrender to the Allies only if it's allowed to organize a celebratory festival while giving aerial reconnaissance the false impression of fierce ground fighting. -IMDB

Posted by Tygepc at 5:00 AM No comments: