Not Your Parents' Board Games: Game Profile on Catan

The series returns!
In January 2016, KaCSFFS member and notable board game collector David Means gave a presentation to the club about his collection. It was so interesting, I asked for permission to reprint it as a series of posts on this blog. He graciously agreed, and supplied me with his script. I have added the illustrations, hyperlinks, embedded videos, etc.

The first two posts in this series covered more general topics that cover many types of games. They were published on June 4, 2016, and June 18, 2016, and were well-received.

This next part of the series, which is scheduled to run into 2017, takes a closer look at one or more individual games. We hope you will continue to enjoy this series! --Jan S. Gephardt

Not Your Parents' Board Games
Part Three: Profile of the game Catan/Settlers of Catan
by David Means

I’m going to go over some games that have come out in the last twenty years, each of which has a different mechanic. Much of the information about the board games below came from BoardGameGeek.com, a website dedicated to the hobby of boardgaming. BoardGameGeek (BGG) has a database of well over sixty thousand games and expansions, with a wealth of information about each game. You don’t need to register to use the website, but you do if you want to comment or ask questions in the forums. I’ve been a member since 2008 and my handle there is “claymore_57”.

Catan (formerly The Settlers of Catan), is a hand-management and route-building game in which players try to be the dominant force on the island of Catan by building settlements, cities, and roads. On each turn dice are rolled to determine what resources the island produces. Players collect these resources (cards) -- wood, grain, brick, sheep, or stone -- to build up their civilizations to get to 10 victory points and win the game.

Setup includes randomly placing nineteen large hexagonal tiles (each showing a different resource) in a honeycomb shape and surrounding them with water tiles, some of which contain ports of exchange. Number disks, which will correspond to die rolls (two 6-sided dice are used), are placed on each resource tile. Each player is given two settlements (houses) and roads (sticks) which are, in turn, placed on intersections and borders of the resource tiles. Players collect a hand of resource cards based on which hex tiles their last-placed house is adjacent to. A robber pawn is placed on the desert tile.

A turn consists of possibly playing a development card, rolling the dice, everyone (perhaps) collecting resource cards based on the roll and position of houses (or upgraded cities) unless a 7 is rolled, turning in resource cards (if possible and desired) for improvements, trading cards at a port, and trading resource cards with other players.

If a 7 is rolled, the active player moves the robber to a new hex tile and steals resource cards from other players who have built structures adjacent to that tile.

Points are accumulated by building settlements and cities, having the longest road and the largest army (from some of the development cards), and gathering certain development cards that simply award victory points. When a player has gathered 10 points (some of which may be held in secret), he announces his total and claims the win.

Catan has won multiple awards and is one of the most popular games in recent history due to its amazing ability to appeal to experienced gamers as well as those new to the hobby.

It is also the game that gave us the in-game statement: “I’ve got wood for sheep!” 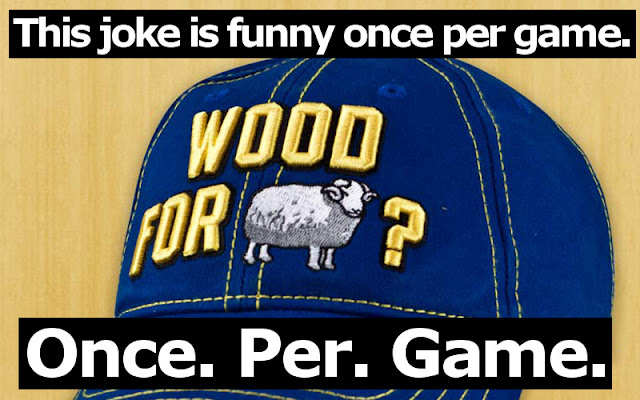 Email ThisBlogThis!Share to TwitterShare to FacebookShare to Pinterest
Labels: Catan, David Means, family board games, Jan S. Gephardt, Not Your Parents' Board Games, Settlers of Catan, tabletop games, the Robber of Catan, wood for sheep